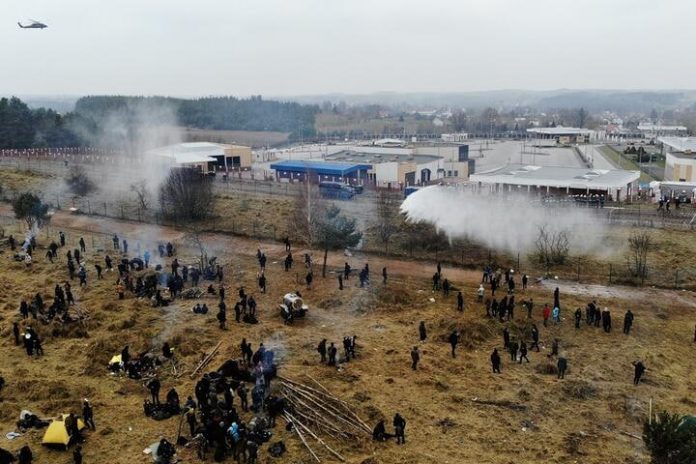 The migrant crisis on the border between Belarus and Poland is the focus of public attention.

Workers and peoples are looking at the dramatic condition of thousand of migrants coming mainly from the Middle East, held in the grip of coldness, barbed wire fence and armed forces on the very border of the two countries, while the international tension grow.

Poland and EU accuse Belarus of intentionally and in an organized manner sending migrants in reprisal for sanctions, while Belarus denies such charges and threaten to cut off Russian gas supplies to EU countries.

It is evident that migrants are the victims of the „geopolitical“ disputes between Belarus and Russia on the one hand, and Poland and EU, on the other hand.

No bourgeoisie power cares about people fleeing their countries, ravaged by decades of imperialist politics of aggressions, oppression and misery, to reach a better life.

Poland government, after refusing for year the re-distribution of migrants arrived in Italy, Greece, Spain, etc., has fenced its border, regardless of the fact that is a member of the EU, “the defender of freedom and democracy”.

EU imperialist leaders now express solidarity with Morawiecki, after have accused him for months to trample the “rule of law”, and widen sanctions on Belarus.

These hypocrites evildoers are the same who paid Erdogan to halt migration toward Europe; that put pressure on African and Middle East countries to adopt similar measures; that did nothing to deal with a problem that was known for months.

The facts confirm that bourgeois freedoms and human rights are just words, that in practice all the vaunted principles of the ruling class are thrown overboard.

This is true also for Belarus and Russia that take into account only their own bourgeois state interests in rivalry and competition with Western imperialist powers, but on the same side against the workers and the oppressed peoples.

The European members of CIPOML,

The cause of the problems that affect humanity is the capitalist-imperialist system, and that the solution only comes from the revolutionary establishment of a new and higher social order: socialism!

Revolutionary Alliance of Labour of Serbia